Horses in the Bible: Will You Ride the White Horse? 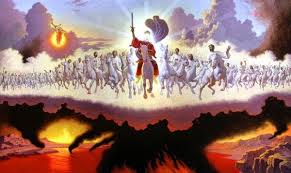 Horses are mentioned in the Bible at least 188 times. However, reviews are mixed.

The Hebrews, usually on foot fought enemies on horses and in chariots. King David was said to have hamstrung his enemy’s horses. Yet horses sometimes saved them and were an important part of the reign of David’s son, King Solomon, who built Jerusalem Holy Temple. Elijah, one of two persons in the Bible who never died, was taken to heaven in a fiery chariot drawn by horses “of fire” (2 Kings 2:11).

A favorite Bible horse story is in the book of Esther. Haman, who hated the Jews, convinced King Aharuerus to write an edict giving his army the authority to kill all the Jews. The Jewish Esther risked her life by asking the king to save her people. He sent an edict out giving the Jewish nation permission to fight, something they did with amazing success. The story is celebrated annually as the Jewish holiday, Purim. The kicker is recorded in Esther 8:10 “And he wrote in the name of King Ahasuerus, sealed it with the king’s signet ring, and sent letters by couriers on horseback, riding on royal horses bred from swift steeds.”

We know that King Solomon, perhaps the wisest person to live, was an active horse breeder. I Kings 4:26 said he had 40,000 stalls of horses for his chariots and 12,000 horsemen. 2 Chron. 9:25, written much later, says he had “4,000 stalls for horses and chariots and 12,000 horsemen. Both numbers could be correct if, as some theorize, the second verse meant that each of the 4,000 stalls were spaces to house chariots, and each had 10 stalls for the horses, something not unlikely.

Solomon used horses imported from Egypt and Kue (likely Cilicia) to control the trade routes between Asia Minor, Mesopotamia, and Egypt, (1 Kings 10:28-29), roads on which he exacted tolls. He stationed groups of horses and chariots in strategic cities, including Megiddo, where archeologists discovered stables for 450 horses and 150 chariots dating to the era of Solomon. Oddly, Cilicia is a province in southeast Turkey, a country that today has an active Thoroughbred breeding program.

Many scholars believe the Book of Job was written during the time of Solomon (1200 BC) and some believe Solomon wrote it. I believe it contains the most accurate verses on warhorses, something I think any Thoroughbred handler would say as true. In Chapter 39, Job has weathered his trials and concludes the power of God with rhetorical questions.
(Vs. 19-24)
Have you (God) given the horse strength?
Have you clothed his neck with thunder?
Can you frighten him like a locust?
His majestic snorting strikes terror.
He paws in the valley, and rejoices in his strength;
He gallops into the clash of arms.
He mocks at fear, and is not frightened;
Nor does he turn back from the sword.
The quiver rattles against him,
The glittering spear and javelin.
He devours the distance with fierceness and rage;
Nor does he come to a halt because the trumpet has sounded.
At the blast of the trumpet he says, ‘Aha!’
He smells the battle from afar,
The thunder of captains and shouting.

Powerful. Yet, other verses warn us to never make horses our God.
Ps 20:7 (NIV) Some trust in chariots and some in horses, but we trust in the name of the Lord our God.
Ps 33:17 (NIV) A horse is a vain hope for deliverance; despite all its great strength it cannot save.
Isa 31:1 (NIV) Woe to those who go down to Egypt for help, who rely on horses, who trust in the multitude of their chariots and in the great strength of their horsemen, but do not look to the Holy One of Israel, or seek help from the Lord.

And of course Jesus was and will be a rider. He rode an “unbroken colt”, a donkey, into Jerusalem while the crowd praised him and lay out palm fronds only to be crucified a week later. (John 12:14). And he will ride again in an end-time prophesy, an area in which horses play the important role of warning of coming judgment. The so called Four Horses of the Apocalypse are in Rev 6 1-8, prophesied in Zechariah 1 6-8 and described in Rev. 9:17-18 as ridden by angels of hell sent out to kill a third of mankind. But not to worry, Jesus shows up in one of my favorite passages, Rev. 19-11-17. He rides a pure white stallion back to earth as a warrior to defeat the forces of evil. Best of all, the “armies of heaven,” who many theologians believe are those who know Jesus as the Messiah, follow him on white horses. It’s a battle to which I look forward. I and many of you,will ride white horses across heaven.

How to Find Healing From Sexual Abuse
January 10, 2020